The little jars of gel , shampoo or conditioner in hotel room baths that establishments give their guests gifts have started to say goodbye . Large international chains such as Marriott, Holiday Inn Express or InterContinental Hotels Group are replacing them with simple , larger wall – mounted dispensers .

This change in strategy responds to the desire to save economically and to reduce the ecological impact caused by plastic waste, two compelling reasons that, however, have attracted some criticism from customers. And the amenities have become a classic and one of the details most valued by users. 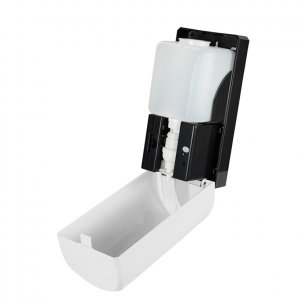 Marriott has already phased out these types of toiletries in 450 hotels in five of its 20 brands.

According to The Wall Street Journal , Marriott has eliminated these types of toiletries in 450 hotels in five of its 20 brands, and plans to extend it to 1,500 establishments in North America in January. For its part, Kimpton, the exclusive brand of the InterContinental Hotels Group, already uses large containers in the showers.

Most of the new dispensers attached to the wall next to the shower are designed in transparent plastic , so that cleaning staff can easily check how much liquid is left. Some customers dismiss the solution as ordinary by retorting that they are reminiscent of soap dispensers in public restrooms, although Marriott counters this criticism by arguing that this measure allows it to offer higher-quality bath products, while also avoiding waste.

The truth is that many of the little bottles are never completely consumed by the guests, who leave them in the half-used bathroom, and that a good number of travelers take them without even unsealing them. And is that some choose to stay in certain luxury establishments in order to get the amenities to show off or use them on future trips.

In any case, the newspaper quantifies the number of jars that are removed annually from each bathroom in a thousand, an amount that multiplied by more than five million, which is the number of hotel rooms in the United States, offers a truly spectacular figure.

This website uses cookies to improve your experience while browsing the website. Of these cookies, cookies that are classified as necessary are stored in your browser, as they are essential for the operation of the basic functionalities of the website. We also use third-party cookies that help us analyze and understand how you use this website. These cookies will be stored in your browser only with your consent. You also have the option to unsubscribe from these cookies. But the voluntary exclusion of some of these cookies may affect your browsing experience.
Necessary Always Enabled